Can entrepreneurship promote political stability and peace in countries around the world? Steven Koltai certainly believes so.

The long-time startup junkie, who was most recently a senior advisor for entrepreneurship at the U.S. Department of State under former Secretary of State Hillary Clinton, spoke at the 31st International Conference on Business Incubation hosted by InBIA, a global network of entrepreneurs, in Seattle on Monday.

After launching two companies and working as an investment banker, management consultant, and media industry executive, Koltai took a job with the U.S. government under Clinton in 2009 and helped create the Global Entrepreneurship Program, which focused on job creation via entrepreneurship in Muslim-majority countries.

There is a straight line connection between entrepreneurship, jobs, political stability, and peace. 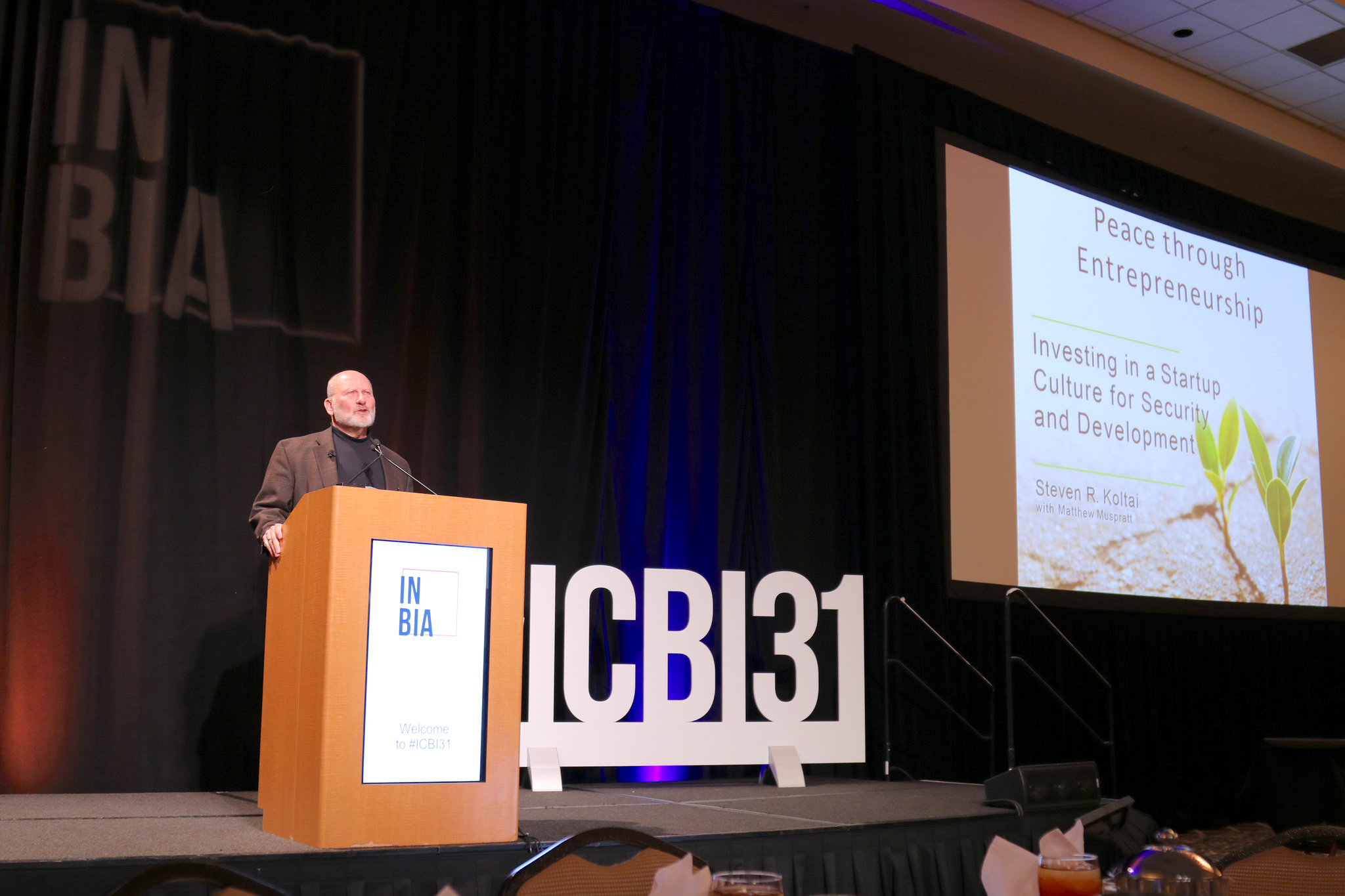 Koltai, who now runs his own consulting company, rehashed some of the main takeaways from his book, Peace through Entrepreneurship.

“I wrote this book based on one simple premise: joblessness is the single biggest cause of political unrest and violence in the world,” Koltai said. “And the single best way to create jobs is through entrepreneurship. There is a straight line connection between entrepreneurship, jobs, political stability, and peace.”

Koltai is focused on how the U.S. can help spur entrepreneurship in developing countries, many of which do not have the resources or cultural norms that help promote startup creation.

Unsurprisingly, many people ask him why the U.S. should be involved in job creation abroad, rather than doing the same at home.

He said this type of outreach directly impacts the U.S. itself — particularly with security. Koltai noted how “all of the wars since World War II, we have lost.”

“We probably should have learned that traditional warfare is not making us safer; it is not making the world more peaceful,” he explained. “So maybe we could take a tiny, tiny, tiny portion of what we spend on what is by far the the largest discretionary spending area of government, and spend it on an alternative method of security creation, which is job creation.”

Koltai provided evidence of how joblessness in different countries going through crisis creates unrest — that in turn can threaten international security, he said.

He also showed how countries that invest and encourage entrepreneurship can create wealth much faster than those who do not, both on an individual basis and on a national economy basis. For example, Singapore and Jamaica shared many similarities in 1965 — island countries, British colonies, similar populations, same per-capita income, etc.

“Part of the driver of that wealth was a focus on entrepreneurship and improving the business climate that existed in Singapore,” Koltai said. “From a purely economic standpoint, it was transformative.”

Koltai hopes that the U.S. will spend more of its foreign aid budgets on entrepreneurship promotion. He said the U.S. spends less than countries like Canada, Sweden, and The Netherlands in absolute dollars. 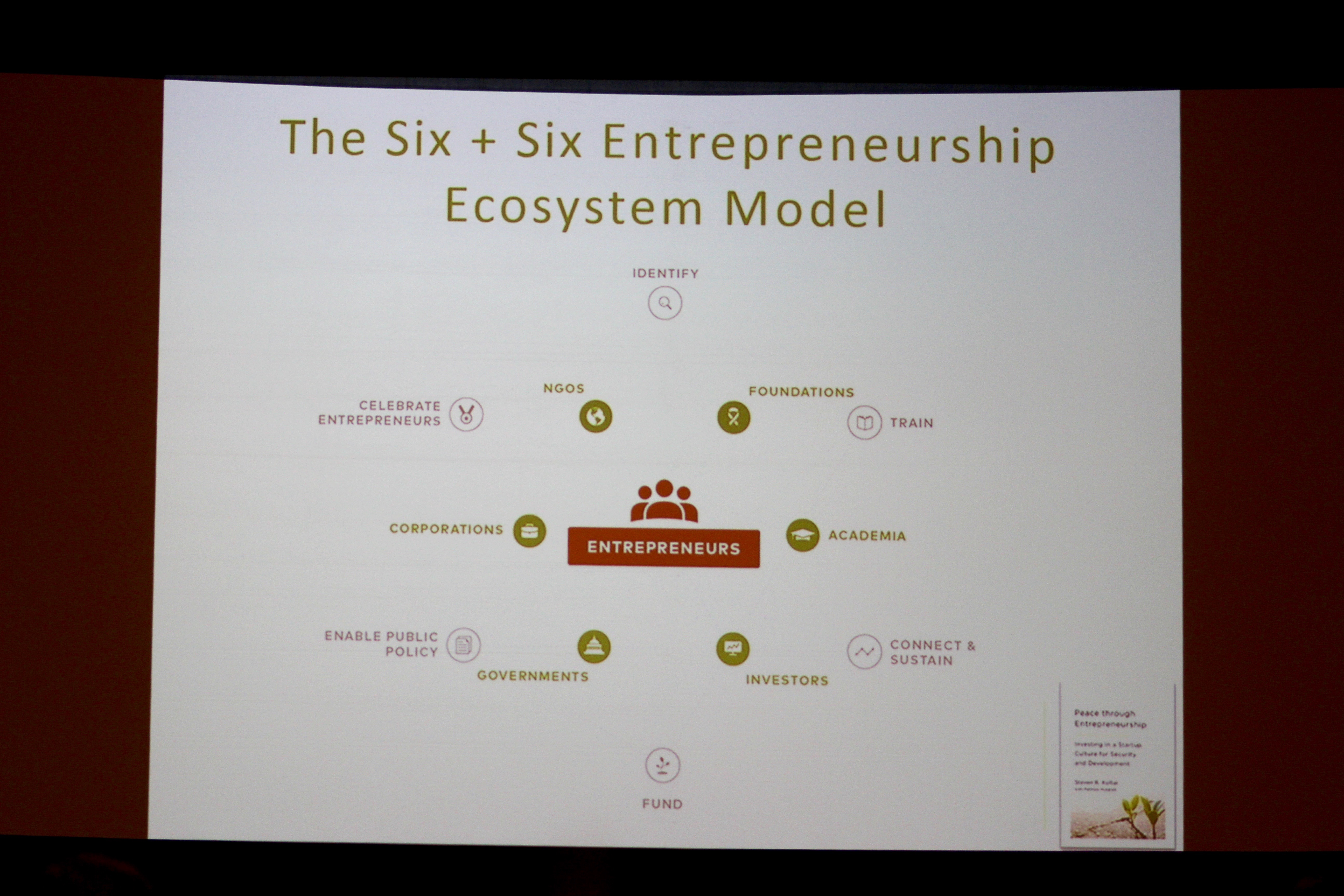 “Not only do we spend very little, but we spend it very badly,” he added.

So how do cities and countries promote entrepreneurship? Koltai developed a “Six + Six Entrepreneurship Ecosystem Model,” which highlights the six actions he believes is required to create more jobs and companies.

“We believe that only through this comprehensive, holistic approach can true progress toward a healthy entrepreneurial ecosystem be achieved,” Koltai writes on his site.

This article was originally published by GeekWire.