An Interview with Victor Hwang

One of our featured keynotes for the 31st International Conference on Business Incubation, Victor Hwang – Kauffman Foundation’s VP of Entrepreneurship, spoke with InBIA’s CEO, Kirstie Chadwick, on his perspective of what it takes to build a successful entrepreneurship ecosystem. Learn how his background from Silicon Valley has helped him establish an understanding of building strong entrepreneurial ecosystems. With trust, courage, and utilizing the tools you possess, you might be surprised with the progress you make as an ecosystem builder.

Watch to hear more key takeaways from this interview and look below for an excerpt from Victor’s book, The Rainforest: The Secret to Building the Next Silicon Valley.

Victor Hwang from InBIA on Vimeo.

Excerpt from Introduction: Our Journey

We knocked on the door and were ushered into a waiting area. At first glance, there was nothing remarkable about the room. It was a typical office in an emerging city. This one happened to house a national institute charged with leading innovation development for the country. We have been to many of these institutes around the world, and they all look about the same.

But then we saw the wall.

What someone decides to put on a wall is revealing. Walls are aspirational. College students often decorate their walls with admired musicians, sports cars, or celebrities. Large companies often hang inspirational posters or modern art.

When you visit many incubators or venture capital firms in Silicon Valley, you see something unique to that world. You see trophies, but not brass cups or blue ribbons. Instead, the trophies are the names of the successful startup companies the firm helped grow. Often, you will see logos like Google, Amazon, Cisco, and others emblazoned proudly―sometimes arrogantly―on the walls of their entrance rooms. That is what we have come to expect.

In this particular office, however, we saw something that struck us as bizarre. Right above the place where visitors sit, clearly for everyone to see, were plaques we had never before seen in such a place:

What was starkly obvious at that moment was how terrible the world is at managing innovation. To date, there has been no systematic way to measure innovation, change it, or grow it. The management tool, ISO 9001, was created in the 1980s as a way to certify quality control for manufacturing processes.1 Borrowed from a different paradigm, it was definitely the wrong tool for the job.

For all the aspirational talk about innovation by CEOs and Presidents, society still lacks the right tools to deal with innovation. Like ISO 9001, the best management tools available are the same ones that automobile manufacturers might use to calibrate the quality of machine parts. If that is really the best management tool available for innovation, it is no wonder governments and corporations have such a hard time with it!

Why were we sitting in this room? We call this work Extreme Venture Capital―working on the fringes of the world’s venture economy to fund the growth and development of promising startup companies. This work takes us from places as developed as Japan, Taiwan,

Scandinavia, and New Zealand, to still emerging regions such as Mexico, Egypt, Kazakhstan, Colombia, Saudi Arabia, and the Palestinian Territories.

We are atypical venture capitalists. Our practice consists of two interconnected halves. On one side, we do what many venture capitalists do―we identify and invest in highly selective technology startup companies, and try to help them grow quickly and profitably, forming close partnerships with our entrepreneurs. Frequently, we work with scientists who are building companies from scratch based on their university research. Our chosen startups span a range of sectors from software to hardware, from biomedicine to bio-agriculture, from renewable resources to clean water.

On the other side, we take the insights gleaned from our hands-on experience and apply them to global development by working with governments to develop venture funds, startup incubators, and technology policy in emerging markets. We have a rare set of proficiencies at this intersection of private venture and public policy. We have advised dozens of institutions, such as the World Bank, the U.S. Agency for International Development, and numerous foreign governments. We have mentored thousands of entrepreneurs and innovators in over 30 countries. This has given us a special vantage point from which to observe some of the most interesting emerging companies in the world. We have managed organizations―Larta Institute, CONNECT, and Global CONNECT―that are considered thought leaders in this field. Today, we run T2 Venture Capital, which is headquartered in Silicon Valley and has offices in San Diego, North Carolina, Washington, D.C., and Dubai, among other places.

Over decades of combined experience, we have developed a unique field of expertise―the analysis and fostering of innovation systems. In so doing, we have discovered that the development of entire innovation systems differs profoundly from the conventional wisdom for encouraging innovation at the scale of individuals or small teams. … 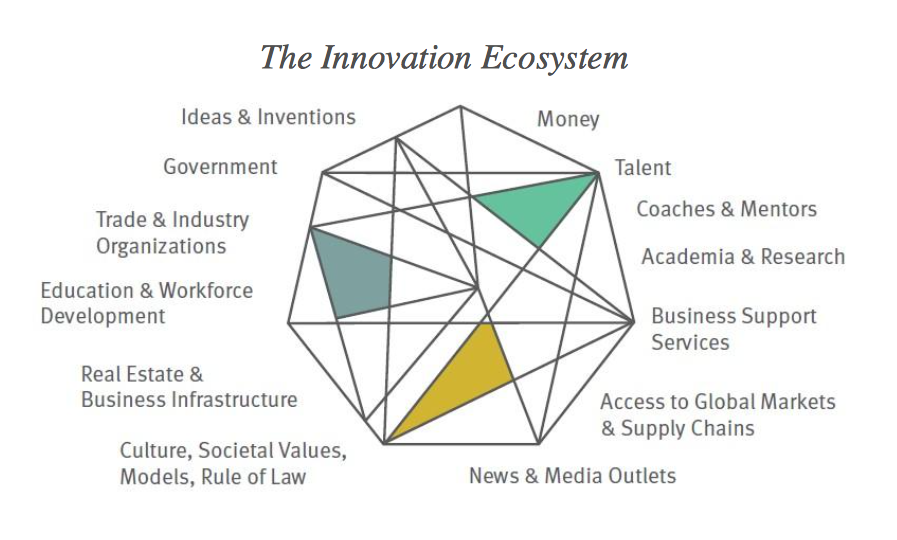 1 ‚Selection and Use of the ISO 9000 Family of Standards,‛ International Organization for Standardization, accessed August 30, 2010, http://www.iso.org/iso/iso_9000_selection_and_use.htm.

Excerpt From Chapter One: What is the Rainforest?

A Tale of Two Cities

In San Diego, things were booming. Despite the impact of the Great Recession, San Diego had a well-deserved reputation as a global hotspot for technological innovation. The region was a sleepy retirement and military community only 25 years ago, but now it was being hailed as one of the nation’s most productive areas for the creation of new high-growth startup companies. Over 300 entrepreneurial efforts were being launched each year.2 The city’s startup companies were raising more venture capital than those of the entire Midwest.3 People were calling the region the ‚wireless innovation capital of the world.‛ Most of the world’s leading biopharmaceutical companies―Merck, GlaxoSmithKline, Eli Lilly, Amgen, Biogen Idec, to name a few―had set up operations in San Diego, primarily to access the steady stream of new biomedical innovations emerging from the community. The same thing was happening in software, medical devices, energy technologies, and other sectors fueled by technological innovation. The University of California at San Diego had a similarly meteoric rise, expanding its research activities to $960 million in 2011. 4 As the surfers might say, the region was ‚cooking.‛

The explanations, it seemed, were obvious. San Diego was benefitting from policy changes that had unleashed the forces of free enterprise. Entrepreneurs could take grand ideas and turn them into realities because American society had lowered the barriers for doing so. Laws governing real estate, intellectual property, contracts, and corporations were sound and transparent, and they were easy to enforce. Taxes were low enough to keep entrepreneurs motivated. A brand new corporation could be setup in minutes and at a low cost. There were few serious artificial barriers standing in the way of building the Great American Company.

Furthermore, San Diego had a tremendous network of people with deep, relevant expertise in science, technology, business, law, finance, accounting, and other key areas. This community of experts created a network of activity in which the best and brightest from around the world gravitated to the region to work with the people there, which attracted more people with complementary knowledge and skills, creating a circular, self-generating process that produced spectacular economic results. What Hollywood had done for entertainment, San Diego was doing for technology innovation.

In Chicago, however, it was the worst of times. True, there were a few unusual companies, such as the marketing wonder Groupon, but those sparks seemed like one-offs. They were not igniting the same kind of a system-wide transformation in the region that San Diego was experiencing. The experts were perplexed. Chicago had many of the same ingredients for technological innovation and entrepreneurial success. The city had almost exactly the same legal and business structures that San Diego had.

The region’s educational institutions spawned a natural supply of raw talent and expertise. Two of the leading universities in the world―the University of Chicago and Northwestern University―were located a short distance from downtown, but little of their science was being translated into innovative commercial products. Nor could this lack of ‘technology transfer’ be attributed to disinterest on the part of the institutions. The University of Chicago―a school that counted 85 Nobel laureates as past or present teachers, students, or researchers―was actively seeking to accelerate the commercialization of its scientific discoveries.

Chicago had become one of the nation’s most robust financial capitals, with massive hedge funds and the world’s largest options exchange, but little of that money was flowing to entrepreneurial startups in the region. There were a number of major technology corporations already in the area―Baxter, Motorola, Alcatel Lucent, and Boeing among them―but they were not considered active participants in the commercialization of new technologies there. People had even dubbed the region the ‘Silicon Prairie’ to express their aspirations for it to become the American Midwest’s leading hub for innovation.

Despite its infrastructure, institutions, expertise, capital, and grand aspirations, however, the metropolitan region of Chicago was seeing a trickle of technology startups compared to San Diego’s flood, and those startups were having a hard time growing into sustainable companies. How do we explain the difference? The two reasons people most commonly cited to explain San Diego’s success―the power of the American free enterprise system and the region’s concentration of talent and expertise―could just as easily be said about Chicago, if not more so. Unfortunately, the conventional answers fail to explain the perplexing divergence of these two cities. San Diego had turned into a highly productive system of innovative activity―a Rainforest. Chicago had not.

Chicago is not alone. Today, the rest of America’s industrial and agricultural heartland, not to mention the rest of the world, is essentially confronting the same challenge. Most of the world wants to be a Rainforest, but can’t figure out how.

We are left with a great mystery. Like the biological riddles buried in the rainforests of the Amazon, this mystery does not easily reveal its secrets. But like scientists toiling in the jungles over many years, we believe we have uncovered some of the answers behind this puzzling mystery of innovation. …

Learn more about The Rainforest, here.

About the Authors: Victor Hwang and Greg Horowitt 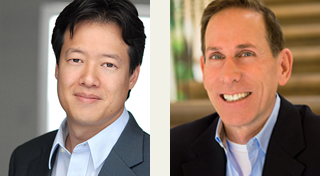 Victor Hwang and Greg Horowitt are experienced venture capitalists, who have both also led organizations designed to further the growth of innovation economies and are now advising international organizations and governments around the world. They are co-founders and managing directors of T2 Venture Capital, a Silicon Valley firm that grows startups, invests capital, and assists in the development of innovation economies worldwide. They have advised the World Bank, the U.S. Agency for International Development, and governments on every continent except Antarctica.